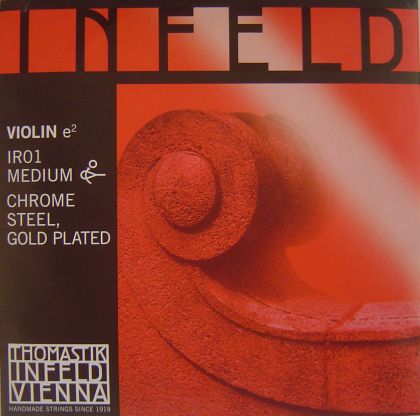 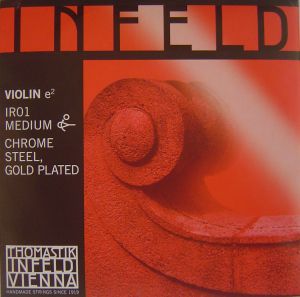 Up till now violinists have influenced the sound of individual strings, and of their violin as a whole, by using a mix of strings with different gradations of tension (high, middle, low), or even using strings from different manufacturers. Due to the entirely different characteristics of individual strings, both strategies strongly affected the tonal balance of the instrument, forcing the violinist or the violin maker to optimize the instrument by a laborious process of trial and error. Different strings meant that different times were required to play in the strings, and that their playing life-spans differed. Response characteristics were also uneven. The result was that for the violinist the string set did not behave as balanced whole, each string responding unequally to his or her playing. With Thomastik-Infeld's new concept Infeld Violin, string types can be changed at will, allowing the violinist to affect the overall tonal balance of his or her instrument with ease yet retaining smoothly matched playing characteristics.

At present there are two types of Infeld Violin strings, whereby the red set will produce a rather dark sound on the majority of violins, while the blue set will tend to bring out the instrument's brilliance. Tonal balance, playing characteristics at any given position and string response are excellent throughout. This is possible due to homogenous string tension at various pitches and design parameters which balance the overall behaviour of the set irrespective of the combination of strings. Using the INFELD VIOLIN system, both the violinist and the violin maker will find that the instrument can be optimized in a very short time.


The Infeld Violin system affords the player a list of advantages:

* suitable for old and new instruments.
* relatively insensitive to excess humidity.
* strings settle in quickly, stabilising early on in the string's life for concert use.
* low overall tension on the instrument produces an open, transparent sound.
* very responsive to different playing techniques, lending itself to various interpretative approaches.
* large and full sound, making the string sets suitable for soloists and chamber music players.
* good purity of open fifths, even when strings are older.
* excellent response in all positions.
* the set emphasises the innate tonal characteristics of each violin, making instrument adjustment easier.

There are two kinds of E strings. The gold-plated E strings are manufactured using a special process, which considerably improves their performance and sound in relation to conventional gold-plating methods. The 'silver' E strings are galvanised, which allows their sound characteristcs to come to the fore unimpaired. The rest of the strings have a composite core, which fulfills all the functional characteristcs expected of a great string. The first winding of the string consists of a alloy which actually occurs in Nature, which is why it is designated as 'Natural Alloy'. Already centuries ago this type of alloy was regarded as having special properties. The G string is wound in pure silver, assuring optimum density. The A and D strings are wound with an alloy called hydronalium, which makes for good bow contact and excellent balance between bowing noise and resultant string sound.

For optimal response after putting on a set, all the strings should be cleaned before playing with a dry cloth. A microfibre cloth is especially recommended. To enhance stability and readiness for concert use, each string should be slightly warmed after being changed and tuned up by sliding your thumb up and down the string about five times, applying light pressure. The instrument should then be re-tuned and this process repeated three times. Bowing near the bridge with considerable pressure (up bow and down bow about five times each) will make the strings ready for concert use in the shortest time possible. Experience has shown that strings prepared in this way can be made concert-ready in as little as two to three hours. However it should be noted that these preparatory measures can shorten the sonic life span of the strings and should only be used if circumstances demand the shortest possible preparatory time. The strings put on first should be the ones whose tonal characteristics (mellow or brilliant) the player considers more important for his or her instrument. It should be noted that on particular instruments a given string may respond differently than one would expect. For example, the brilliant G string (blue) can produce a brilliant or dark sound depending on the instrument, since sometimes the frequency characteristics of the violin itself do not match those of the string.
The problem can usually be solved by changing a string within the Infeld Violin system, the desired tonal balance being achieved in almost all cases.If one or more strings turn out to be tonally inappropriate for a given instrument, the following procedure has proven very successful: